[March 30, 2020] When SRI was introduced in the Mwea irrigation scheme in Kenya in 2009, mechanization of rice cultivation existed in the form of primary land tillage and rotavation – which were, and continue to be done by tractor. The tractors were owned by the National Irrigation Board (NIB) and tillage services were leased out to farmers. Paddy field leveling was done and continues to be done using animal-drawn wooden boards. All other rice farming activities used manual labor i.e., nursery seeding, transplanting, weeding, harvesting, and threshing. A lot of progress has been made since then as documented by Bancy Mati. 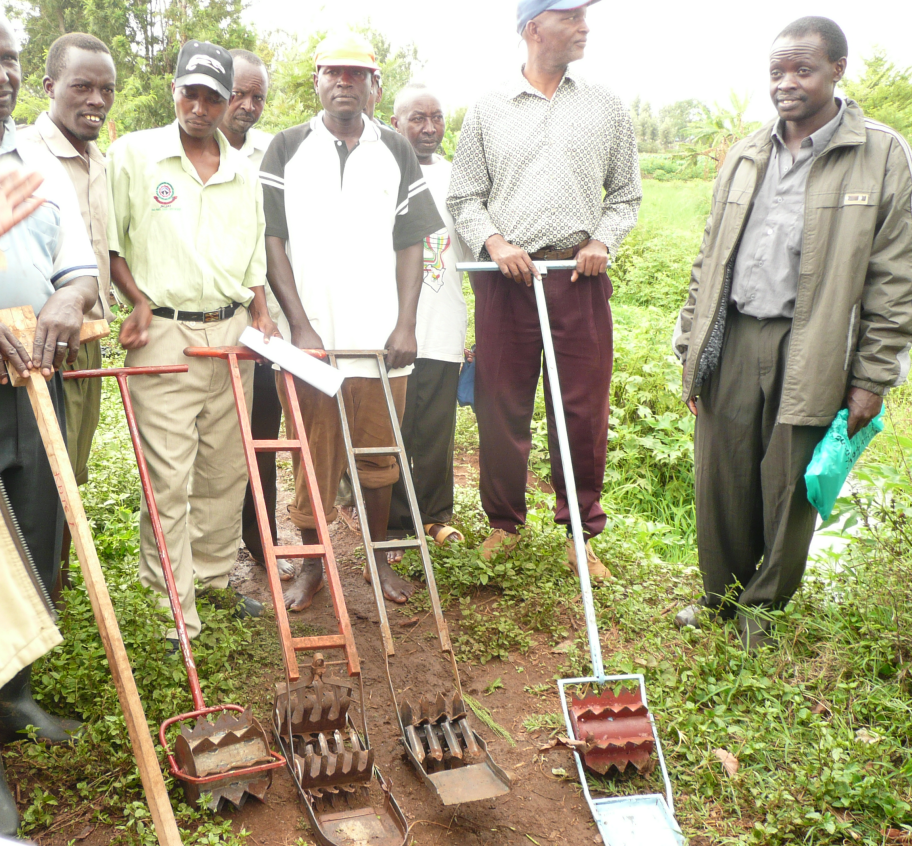 SRI methods recommend mechanical weeding, preferably using a simple low-cost push-weeder (which also avoids the cost of petrol or diesel-powered weeders). A decade ago, there were very few weeders in Mwea and it was not clear which weeders were most suitable. A small study in 2010 led by Prof. Patrick Home of JKUAT assessed a set of seven weeders from Japan, India and Tanzania (see photo at right). The Mwea farmers settled on three weeders, though their favorite was the Japanese model. In 2011, the three preferred models were taken to three foundries based in the Wanguru Market in Mwea and to a youth training centre; they were distributed to farmers for free. In 2015-16, when implementing the SRI extension project in Western Kenya serving the Ahero, West Kano and Sisso irrigation schemes, 30 weeders were initially ordered from a foundry in Ahero town under that project (which was supported by AgSRI in India).

A decade after SRI was introduced into Kenya, its adoption has spread, the demand for weeders has grown, and individual farmers started ordering for weeders directly from the foundries. Today, rotary weeding is the preferred mode for weeding in Mwea, Ahero and West Kano irrigation schemes. The weeders are sold for between Ksh.2,000 to Ksh.3,000 (20 to 30 USD) and farmers are able to buy locally-made weeders without project support. It is a win-win value-chain development, creating employment opportunities and reducing the drudgery of labor in paddy rice production. [See Mati’s article for additional information and pictures of the weeders.]

📂This entry was posted in Kenya 📎and tagged SRI-NEWS