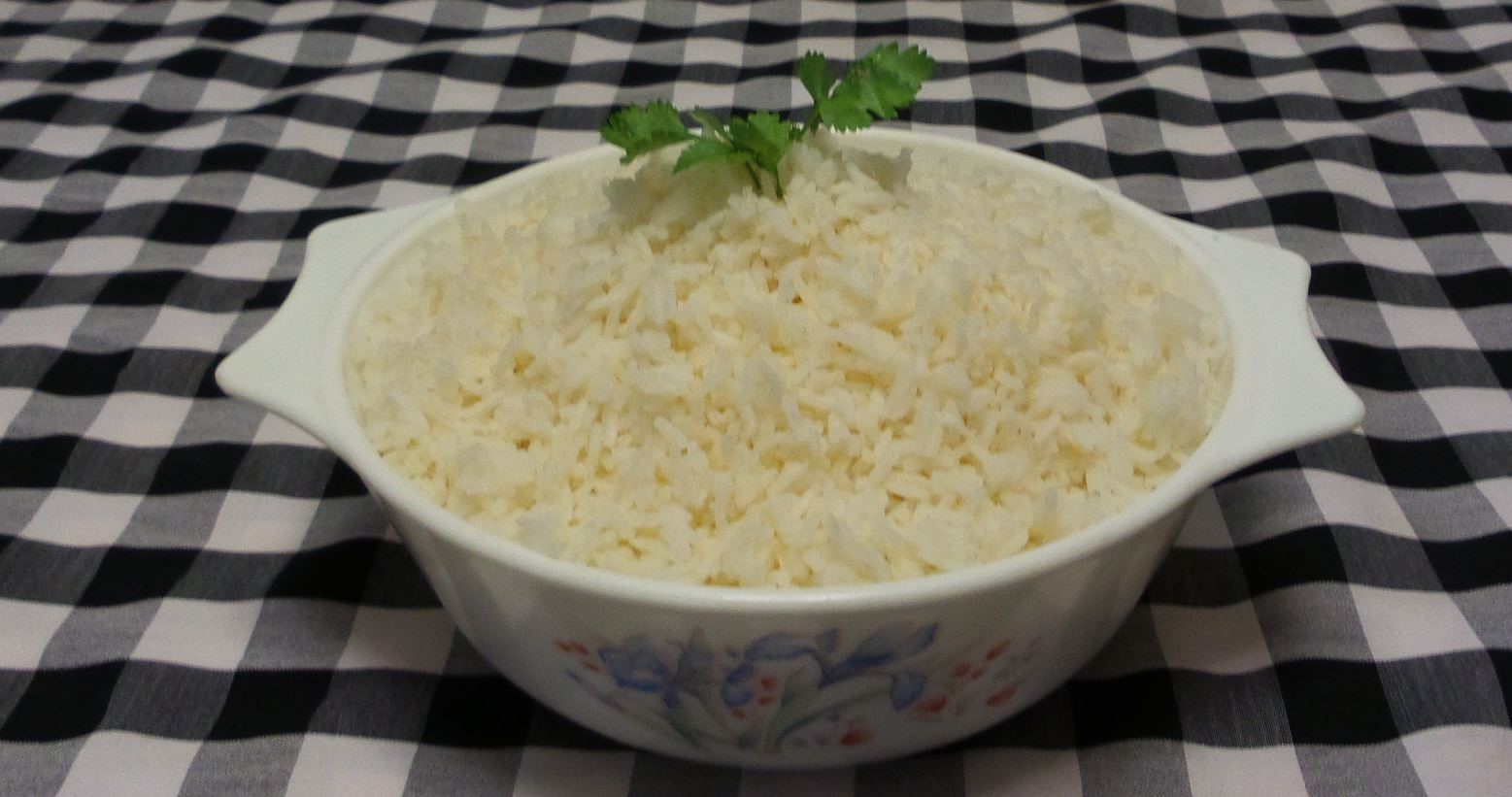 Rice is set to become a major food staple in Africa, as urbanization and population growth has seen demand for rice grow rapidly over recent decades. The younger generation are eating more rice in place of traditional foods, for a number of reasons. Rice is easy to prepare, requires less energy to cook and tastes delicious. It can be eaten with almost any accompaniment, be it legumes, vegetables, meats, fish, eggs or a wide array of sauces. Rice is gluten free and has many health benefits, with almost no allergies. A rice meal can be as easily prepared for one person as for large gatherings. Rice is good for babies, for the elderly and indeed for all age sets and cultures. No wonder, as a child, we had a nursery rhyme sung thus: “Rice is nice, it is eaten with a spoon”. 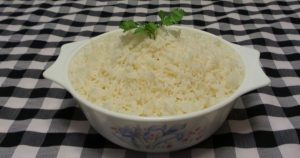 Rice is grown in 38 African countries, yet the continent is a net importer of rice as demand outstrips production supply. The deficit is in part due to relatively fewer areas put under rice cultivation and poor yields, averaging less than 3 tons per hectare, when potential can be up to 15 t/ha for some varieties. This means that Africa requires to increase rice production, and one way is to improve the productivity of the crop, starting from the field and through the full value chain. 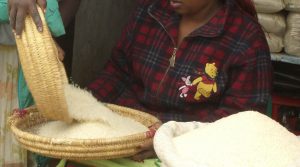 Rice in an African market

In Africa, most of the rice is grown in fully flooded paddies utilizing too much water, averaging between 3,000-5,000 litres/kg of grain yield. Furthermore, flooded paddies become habitats for water-borne disease vectors, posing health and environmental challenges. Yet flooded paddies do not achieve optimum rice productivity. Indeed it has been scientifically proven that, although rice is an aquatic plant, it does not have to be grown under a fully flooded paddies. This, as well as other aspects of rice agronomic practices can be changed to enable farmers produce more rice from the same land, while using less water. This is the promise of the system of rice intensification. 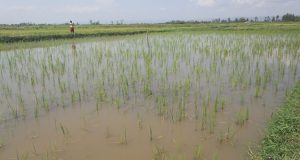 The System of Rice Intensification (SRI)

The System of Rice Intensification (SRI) is a package of practices especially developed to improve the productivity of rice grown in paddies. Unlike the conventional method of continuous flooding of paddy fields, SRI involves intermittent wetting and drying of paddies to ensure aerating of the root zone as well as specific soil and agronomic management practices. These include; raising seedlings in un-flooded nurseries, transplanting young seedlings in lines and at wider spacings; planting only one seedling per hill, mechanical weeding and use of organic manures. 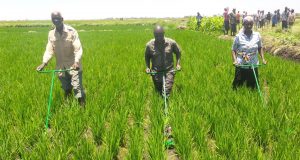 Mechanical weeding of a paddy field of SRI grown rice

SRI has been scientifically proven and verified by farmers, as a best practice for growing rice. The System increases rice yield, saves irrigation water, utilizes less seeds and results in better grain quality, thus increasing net incomes for farmers. SRI has other benefits beyond yield and profitability, such as: faster crop growth, resistance to drought and storm damage, a harder grain-thus less breakage during milling, improved health and work environment with reduction of water-borne disease vectors and ergonomic advantages with mechanical weeders. SRI is attractive especially to small-scale rice farmers who have adopted the system in place of traditional fully-flooded paddy systems. 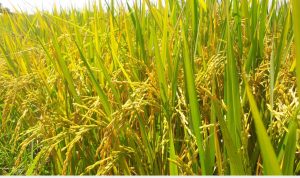 A field of ripening SRI-grown rice

SRI was developed in Africa, specifically in Madagascar in the 1970s-80s. The technology remained unknown to the rest of the world until it was documented by scientists and promoted from the late 1990s. Since then, SRI has been adopted by probably about 20 million farmers worldwide, accepted as a valid set of agronomic practices that incredibly help increase rice yields while saving water. Within Africa, SRI has been validated and adopted in some 25 countries on the continent.

Why a Knowledge Portal for SRI in Africa

The scientific basis for adoption of SRI has been proven in many countries all over the world including in Africa. But gaps still remain in knowledge flows- upwards to reach policy makers, laterally to reach extension workers and farmers. Because Africa is a continent fragmented by national boundaries, languages, geographic zones and cultural barriers, while technological divides between scientists and farmers exist, the has been need for a one-stop knowledge platform bringing together SRI fraternity in Africa. That’s the gap this portal partly plugs.

SRI-Africa is a web-based information and knowledge sharing portal launched on 10th August 2018. Its main objective is to build a vibrant Africa-wide Community of Practice for SRI, through information and knowledge sharing, advocacy, activities and giving SRI visibility and a voice (one African voice for SRI). SRI-Africa puts together data, information, publications and happenings in the SRI nexus in Africa drawn from individual countries. These are collated on a regular basis and put in a continental website, culminating in a one-stop knowledge portal for SRI in Africa. This helps track the progress made by African countries in pushing forward with SRI, as a sustainable way to grow more rice to feed the continent, while also saving water.