In 2012, the NGO Africare funded the initial tests of SRI in Niger, which were implemented by the NGO ONAHA. After mixed results of these trials, Institut National de la Recherche Agronomique du Niger (INRAN) and ONAHA were encouraged by CORAF through its 13-country regional SRI project, Improving and Scaling up the System of Rice Intensification in West Africa (SRI-WAAPP), to continue testing and sensitize all stakeholders in the rice sector to promote the SRI in Niger. In 2012, a member of Niger’s Ministry of Agriculture presented on the potential adoption of SRI in Niger at the Regional Workshop on the System of Rice Intensification (SRI). In 2014, an awareness mission was launched on SRI practices on several irrigated perimeters along the river. This mission identified 16 pilot producers who agreed to conduct the tests in their plots. These producers are distributed on the following perimeters: 3 in Daybéri, 4 in Sébéri and Say II and 5 in Sakondji Birni. This mission was followed by the training of more than 60 producers and their supervisors in rice production techniques using the principles of SRI. WAAPP-Niger’s report by Haougui et al covers dry season SRI trials for the 2014-2015 season, which found that the adoption of SRI management principles resulted in more tillers and higher yields. By 2015, SRI-WAAPP in Niger had directly trained 100 farmers and indirectly exposed almost 6,000 farmers to SRI principles. After the close of the SRI-WAAPP project, the West Africa Agricultural Productivity Program (WAAPP) in Niger has continued to support SRI. A report of the August 2018 training for producers in Dogo (Zinder region), Kalfou (Tahoua region), Say (Tillabéri region), Karakara, Dioundiou, Birni and Gaya (Dosso region) outlines interest, potential, and status in these areas. 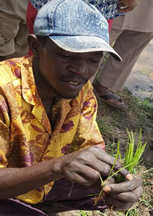