The first SRI trials in Senegal were done in 2003 at the initiative of Dr. William Settle (FAO) who reported control plots yields of 4 and 5 t/ha vs. SRI plot yields of 9 and 11 t/ha, respectively. In 2006, Peace Corps Volunteer Carrie Miner had some initial success introducing SRI to women farmers in the Kolda region (see New Farm article).

During 2007-2009, Tim Krupnik and colleagues at FAO and the Africa Rice Center did a series of evaluations that included adapted SRI practices in the Senegal River Valley and in the Podor region. Their research during 2008-2009 showed that adapted SRI practices resulted in significantly higher yields than traditional farmer practices and were as good or better than current recommended management practices. However, while farmers appreciated the yield and water saving benefits of the adapted SRI approach, they were concerned by the increased labor requirements, especially for weeding activities that coincided with labor needs for the horticultural crop. These findings resulted in further experimentation with a hybrid system that incorporated elements of the recommended practice and the adapted SRI practices (maintaining intermittent irrigation, increasing crop density and following a single round of mechanical weeding with localized herbicide applications). The hybrid system was able to reduce weed biomass, labor, and input requirements (including herbicides) and gave the highest net profits in nearly all sites for the 2009 wet and dry seasons. 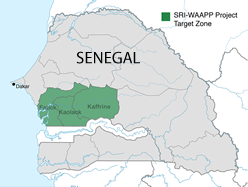 During 2012, a delegation from Senegal at the Regional Workshop on the System of Rice Intensification (SRI) in Burkina Faso reported that trials evaluating SRI methods (comparing them with farmer practice under rainfed conditions) in the northeastern part of the country began in 2008 at four sites, and increased to six in 2011. The trials, which were conducted under the Agricultural Development Project in Matam (PRODAM), reported that SRI yields averaged 53% higher than farmer-practice results. During June 2012, USAID’s Expanded Agribusiness and Trade Promotion (E-ATP) sponsored a ToT on SRI in Kaolack, with 33 participants from seven partner organizations. In July, 2013, four Peace Corps-sponsored SRI trainings were provided in Senegal’s Kaffrine and Fatick Regions. A study on SRI adaptations in these four sites was completed in 2014 by Lorraine Perricone-Dazzo as part of her Cornell University MPS degree (see update below).

A regional workshop for finalizing the project “Improving and Scaling Up of the SRI in West Africa” was held in Saly, Senegal, from July 30 to August 2, 2013. The SRI-WAAPP project, a 13-country initiative, began during January 2014. The SRI-WAAPP project in Senegal, with Abdoulaye Sy as the Project National Facilitator, began during August 2014. The map at left (click to enlarge) shows the project target zone. As of 2016, there is an updated map of SRI-WAAPP sites in Senegal, which is located below. During 2014, SRI expanded in Senegal through of the efforts of the World bank-funded West Africa Agriculture Productivity Program (WAAPP) program, Peace Corps Senegal, and other smaller initiatives in the country. In December of that year, the National Agency for Agricultural and Rural Extension (ANCAR), in conjunction with SRI-WAAPP made plans to mobilize 5,000 rice producers in Senegal’s Fatick and Kaolack regions to try out SRI methods in order to improve rice productivity and farmer income. A four-day technical training was held in Dakar from August 3-6, 2015, with participants from 11 ECOWAS countries, who learned from SRI-Rice how to use ESRI’s data collection, visualization and reporting platform to manage information on SRI progress for the SRI-WAAPP Project. While the SRI-WAAPP project ended at the end of 2016 (see map for field sites), subsequent visits from World Bank and WAAPP officials in October 2017 confirmed continued appreciation of SRI by farmers, who were spending less on seeds and inputs, while helping to mitigate climate change by lowering greenhouse gas emissions, and reaping bigger harvests.