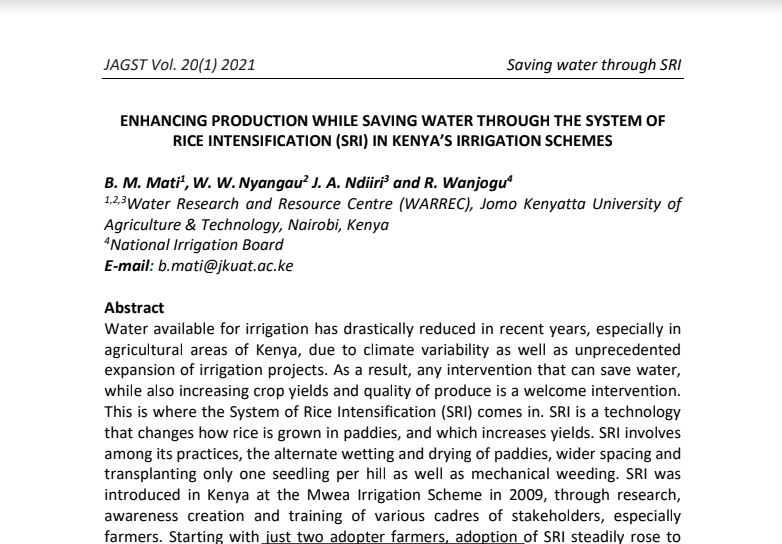 Water available for irrigation has drastically reduced in recent years, especially in
agricultural areas of Kenya, due to climate variability as well as unprecedented
expansion of irrigation projects. As a result, any intervention that can save water,
while also increasing crop yields and quality of produce is a welcome intervention.
This is where the System of Rice Intensification (SRI) comes in. SRI is a technology
that changes how rice is grown in paddies, and which increases yields. SRI involves
among its practices, the alternate wetting and drying of paddies, wider spacing and
transplanting only one seedling per hill as well as mechanical weeding. SRI was
introduced in Kenya at the Mwea Irrigation Scheme in 2009, through research,
awareness creation and training of various cadres of stakeholders, especially
farmers. Starting with just two adopter farmers, adoption of SRI steadily rose to
cover five irrigation schemes in Kenya, namely, Mwea, Ahero, Budalangi, West Kano
and South West Kano. By December 2017, over 10,000 rice farmers had adopted SRI
in the five schemes. The high adoption was driven by positive results. In Kenya, SRI
increased rice yields by between 20% -100% depending on variety, while water
savings of 25%-33% have been recorded under controlled experimentation.
Research on SRI has been conducted by PhD and masters students, thus validating
the technology scientifically, showing increased yields and water-saving factors. The
effects of SRI on mosquito breeding showed that all mosquito larvae died in paddies
under SRI, while they remained alive and multiplied in conventional flooded
paddies, showing the technology holds promise for reducing malaria prevalence.
Furthermore, SRI produces a harder, better grain which has superior qualities on
milling and marketing. Indeed, SRI is a green technology which holds promise for
food security, water savings, health and environmental benefits and improved
productivity of rice in Africa.