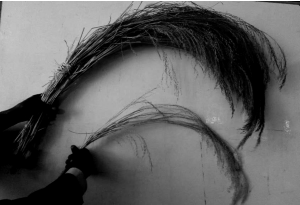 Future strategies for sustainable food security will need to get greater productivity from available
land, labour, water and other resources, producing more food, as much as possible, with reduced
inputs. The System of Crop Intensification (SCI) which emerged from an agroecological production
strategy developed for rice in Madagascar in the 1980s has shown promise in various countries for
raising the yields of diverse crops with less reliance on purchased external inputs, using less seed and
needing less water because of enhanced root growth and soil improvement. Here we review the
adaptation and application of SCI principles to increasing the production and availability of Ethiopia’s
most important indigenous grain crop, tef. National production of this staple food, which is essential
for the country’s food security and is also nutritionally very beneficial, has increased in recent years
since the government started supporting extension of new crop management methods after the
supply of and demand for tef had become quite imbalanced. Contributing to this increase are
modifications of the tef cropping system: the System of Tef Intensification (STI), which is one of many
SCI derivations, and a less-intensified version designated as TIRR (Tef with Improved seed, Reduced
seed rate, and Row planting). STI, which is based on transplanting tef seedlings rather than
broadcasting tef seed, requires considerably more labour than farmers’ current methods, and
weather conditions must be conducive. However, the greater production from STI practices can
more than repay the investment of additional labour if farmers are willing and able to make such
expenditure, and if the timing of rains permits. TIRR is a less labour-demanding methodology based
on drilling tef seed in rows with wide spacing. It is now being promoted by the government to raise
national tef production. While it does not improve yield as much as STI does, it is easier for Ethiopian
farmers to adopt. Both STI and TIRR modifications capitalize more effectively on the limited
resources available to smallholding households which produce tef as their main staple crop for
sustenance and for sale. TIRR includes the promotion of improved varieties of tef, while STI has
shown improved yield with practically all varieties. These crop management methods draw on
existing potentials within tef plants and in the soil systems where these plants grow.