To What Extent Do Improved Practices Increase Productivity of Small-Scale Rice Cultivation in A Rain-fed Area? : Evidence from Tanzania 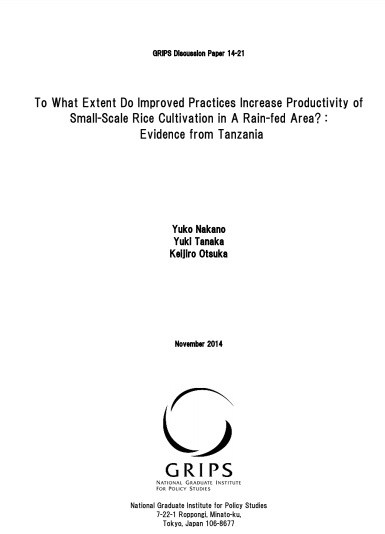 Agriculture development is indispensable for poverty reduction and food
security in Sub-Saharan Africa (SSA). Among other crops, rice is considered one of
the most important and promising crops to achieve a Green Revolution similar to Asia,
which lead to a drastic increase in paddy yield due to the diffusion of modern varieties
and chemical fertilizer use (Otsuka and Larson, 2013; Seck et al., 2010). In fact,
fertilizer-responsive modern varieties developed in Asia have exhibited high yield
potential especially in irrigated areas in SSA (Kajisa and Payongayong, 2011; Otsuka
and Larson, 2013; Nakano et al., 2013). However, the irrigation ratio in SSA is much
lower than in Asia (Hayami and Godo, 2005; Johnson, et al., 2003). Since it takes time
and resources to develop irrigation infrastructure, whether SSA can achieve a rice
Green Revolution in near future critically depends on the strategy for the development
of rain-fed rice cultivation even though the importance of irrigation development will
remain unchanged in the long run (Nakano et al., 2014; Nhamo et al., 2013).
Recent case studies have shown that intensive training on rice cultivation can
effectively enhance the adoption of new technologies including modern variety,
chemical fertilizer and improved agronomic practices such as dibbling, and
productivity of rice cultivation both in irrigated and rain-fed area in SSA (De Graft
Johnson et al., 2014; Kijima et al., 2012; Nakano et al., 2014). However, improved rice
cultivation technologies are not widely adopted partly because of weak public
extension system (Nakano et al., 2014). One possible solution for this problem is to
utilize private sector’s resource in extension activities in the form of contract farming
(World Bank, 2008). In contract farming, an agribusiness firm manages processing and
marketing but contracts for farm products from peasant farmers. The firm provides

2
technical guidance, credit and other services to peasants in return for their pledged
production to the firm (Hayami and Godo, 2005).
In order to examine the potential of improved practices in rain-fed rice
cultivation, authors conducted a survey in Kilombero district in Tanzania, the largest
rice producing country in East Africa. In our study site, Kilombero Plantation Limited
(KPL), which is a large-scale private rice farming company, provides training on
improved rice cultivation practices to surrounding small-scale farmers. Although
KPL’s attempt to operate contract farming is still at its initial stage, this study would
provide an opportunity to examine the potential of private extension services to
small-scale farmers in the form of contract farming as well.
The training was called SRI (System of Rice Intensification) and main
contents of the training included the adoption of modern varieties (MV), chemical
fertilizer use, and straight-raw dibbling or transplanting with the spacing of 25cm by
25cm. Note that SRI here is a modified and simplified version of the well-known SRI
developed in Madagascar, which does not require a new variety nor additional external
inputs. 1 Thus, we call the package of technologies adopted in our study site as
modified SRI (or shortly denote as MSRI).
We collected two types of data: first one is plot-level recall data on paddy
yield and the adoption of technologies for the past 4 years, which include both before
and after the training. The second one is cross-sectional plot-level data on rice
cultivation, which include detailed information on the use of current, labor, and capital
inputs in 2013. It is relatively easy for the farmers to recall their technology adoption
1 The main components of SRI include (1) early transplanting of seedling that are
8-12 days old; (2) shallow planting (1-2 cm) of one or two seedlings; (3) sparse
planting in a square grid (more than 20×20 cm); and (4) intermittent irrigation (Moser
and Barrett, 2006; Stoop et al., 2002; Takahashi and Barrett, 2014).

3
and harvest for the past few years, while it is very difficult for them to remember all
the detail on input use. Thus, we construct a recall panel data for the former and cross
section data for the latter. The very unique feature of our data set is that some of our
sample households cultivate rice in more than two plots by adopting MSRI
technologies in a plot and by not doing so in others. This enables us to examine the
impact of technology adoption on paddy yield and profit of rice cultivation by
controlling innate household characteristics by using both our panel and cross-section
data.
The paper is organized as follows. Section 2 explains the study sites and data
collection method, followed by the descriptive analyses in Section 3. Section 4 shows
the regression analyses on the impact of training on the adoption of improved rice
cultivation technologies and paddy yield by using panel data. In section 5, we examine
the impact of technology adoption on costs and profit of rice cultivation by using
propensity score matching methods and sub-sample analysis with household-fixed
effect with our cross section data. Section 6 concludes the paper.